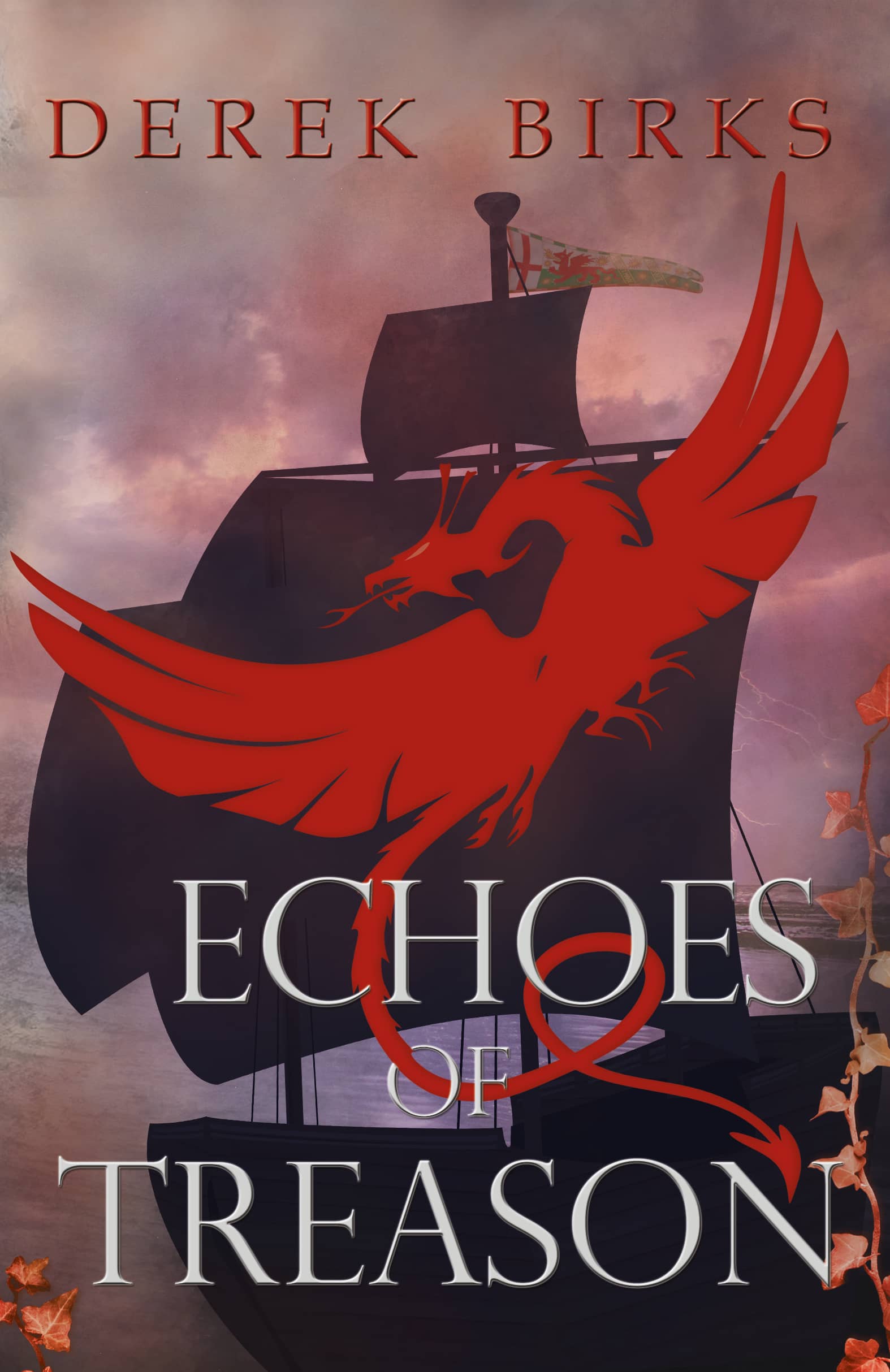 THE RED DRAGON OF WALES IS COMING…

It is autumn 1483 and Richard III is king of England, but rumours about the fate of his nephews are rife and dissent is beginning to grow. Waiting in Brittany, is the exiled Lancastrian heir to the throne, Henry Tudor, who senses that his moment has come. Henry’s mother, Lady Margaret Stanley, plots to restore her son’s fortunes with a series of revolts against King Richard.
After the disastrous events of the summer, the embattled Elder family is scattered and in hiding. The outlawed head of the family, John, has escaped to Flanders along with a few loyal comrades, his sister, Meg, and his lover, Isabel. But the Elders will not be left to lick their wounds for long, because William Catesby, influential servant of King Richard, has made it his mission to destroy them.
When Lady Stanley tries to draw the Elders into the Tudor rebellion, John must decide whether he can cast aside his long-held Yorkist loyalties. Should he join Henry Tudor under the banner of St. George and the dragon of Wales?
It is the devil’s choice: poverty and a life in exile, or the slim chance of returning home by the fickle path of treason.

Part One: New Lives for Old

All the way back from the church, Emma Radcliffe clung to Master Hooper's arm. But though the presence of her late husband’s captain gave her much reassurance, what she really craved now was the peace and solitude of her own house – there to succumb in private to her grief. Yet, with the house only a few yards away, Hooper came to an abrupt halt and gently, but firmly, prised her hand from his arm.

“But I don’t please, Hooper…” Brim full of heartache, her fragile resolve crumbled. “In God’s name, must I stand in the wretched street for every man to gawp at?”

“Stay here, my lady,” he insisted, “for your own safety.”

Seizing one of his men by the shoulder, he told him: “Stay close by your lady, Master Worth!”

Though Emma recognised the gruff voice that Hooper reserved only for times of trouble, she could see no actual threat and watched in disbelief as Hooper’s hand reached for the hilt of his sword. When he led the remainder of the Radcliffe men across the street, she took several faltering steps after him, despite his warning. Then she looked at the house and stopped, open-mouthed.

But, brushing aside his protesting arm, Emma ran to the open doorway of her house. There she cried out in dismay, to discover two of her servants lying beaten and bloodied. Dropping to her knees beside them, she could find no signs of life. Only a few yards away, in the torch-lit passage to her hall, Hooper was grappling with a man she did not know. While she looked on, the two men, as if yoked together, crashed along the passage into the hall.

“My lady!” warned Master Worth, who now had his sword unsheathed.

Desperate to discover what was happening, Emma ignored him again, stepping across the threshold to run along the passage. In her richly-decorated hall, she found chaos: tapestries pulled down, furniture pushed aside and assorted plate tossed into several wooden crates. A bloody skirmish was spiralling around piles of looted goods, as her men at arms laboured to expel the intruders. Hooper and his adversary rolled around the great chamber like wild men, cursing as they clattered against walls and tripped over benches.

Emma recoiled in shock, swaying a little as she reached out to Master Worth beside her.

“Sweet Christ, stay with me!” she pleaded, gasping with relief when he took her by the arm – until she saw the stranger at his back. Before she could cry out, Worth took a dagger thrust under his ribs. For a moment he still gripped her hand, attempting to drag her to safety. But then, letting the hand fall, he crumpled against her. Her mouth opened to scream, but no sound emerged as Worth, with a gentle cough, sent a spatter of blood into her face and fell at her feet.

Swiftly pinning Emma’s arms behind her back, Worth’s killer dragged her from the hall to the rear of the house where he tossed her outside onto the cobbled yard.

“Wait there!” he growled and, pausing only to spit down upon her, he turned to re-enter the hall. But on the threshold, he encountered Hooper who, with a streak of wet blood scarring his face, looked more murderous than Emma had ever seen him.

“Lay hands upon my lady, would you?” he roared and, with only the briefest glance at her, Hooper hacked his opponent down with two brutal blows. Then, kicking the still-twitching corpse in disgust, he took a step towards her.

With a grim, unforgiving stare upon his face, he returned inside and she, terrified, remained exactly where she was in the certain knowledge that Hooper, her husband’s most loyal retainer, was most likely all that stood between her and death.  Hardly daring even to rise from the blood-spattered cobbles, she continued to lie there, peering into the cold eyes of the mangled corpse beside her. Why had this man and his fellows decided to ransack her house? Why, in the very pit of her bereavement, did they come to steal her goods and assault her person? Had someone set them to it? She could see no badge upon the corpse before her, nor livery...

In the ensuing few minutes, Emma strove to determine the likely outcome of the struggle from what she could hear. Thus, when the sounds of strife began to fade, she knew that - one way or the other - the fight was almost over. But what if it was not Hooper who emerged into the yard?

Unnerved by doubt and fear, she retreated from the bloodied body, crawling further into the kitchen garden to hide under a timber bench and pray in silence. There, lying on the moss-covered cobbles, she beseeched the Holy Virgin to save her from a bloody end to her life. Had she not already seen a mountain of woe heaped upon her? Was it not misery enough that her eldest, brave Richard, was killed defending his prince; nor that his young brother, sweet Ralph, should fall victim to a summer fever; nor that her daughter, Alice, should be lost to her forever? Was all that not penance enough, that now, on the very day that she laid her poor, dear Robert to rest, she must come to the end of her days in such a barbarous manner?

Her flood of self-pity was only stemmed when a wounded man lurched out into the yard and stepped over the corpse. As he staggered towards the bench – her bench, and last place of refuge - she could only stare, dry-mouthed. Her eyes were drawn to a trickle of blood which dripped down from his arm, but the wound was slight. Here was the wounded victor, not one of her men, who was coming to claim his prize. And, since there was no other way out of the walled garden, he would have her.

When he grinned, she knew he had seen her, but he came on unhurried, as if savouring the moment. Even if she could summon the will to resist, she had no weapon. In desperation, she explored the ground nearby with her hands until she discovered several pieces of stone. Just wrapping her fingers around one gave her a little more belief, feeling its rough edges sharp against her soft hand. It was perfect: heavy, but not too heavy. Hope flickered in her breast. She could do this; she could fight back.

“Aye, Lady Radcliffe!” she cried, leaping up to swing the stone-charged hand at his head with all her strength. He burst out laughing as he swayed to avoid the blow and then slapped her so hard on the cheek, she fell back down again and the primitive weapon tumbled from her grasp. Lying there on her back, she could see that all vestiges of hope were gone.

“Why are you here?” she whimpered.

A crooked smile crept across his face.

“Sir Robert Radcliffe is stiff and grey now, so what need would he have of rich tapestries, or silver plate, or even this fine town house? Your dead husband, lady, is attainted and all his lands forfeit-”

“That’s what my master told me, lady… and what did he say about you? Yeh, that was it: ‘Toss the lying bitch out onto the street like the common whore she is.’”

A shudder went through her – who hated her that much? “Who is your master?” she whispered, but even as she said the words, she already knew the answer.

“Master… William… Catesby,” announced the injured man, a gleam of triumph in his eye.

“Catesby…” murmured Emma, but of course, when the fatal blow came, it had to be Catesby.

Taking a step forward, he stood leering over her. “I’ve always fancied having a lady!” he said, with a chuckle. But his laughter stopped with a grunt as he contemplated the bloody tip of the sword which had just emerged from his chest.

When Hooper withdrew his weapon, her captor gave only a final gasp and dropped down upon Emma who thrashed her angry fists against his torn chest to push him aside.

“Come, my lady,” said Hooper, holding out a bloody hand to help her up.

Ceasing her wild battering of the body, she spat in the dead man’s lifeless eyes. Then she took Hooper’s outstretched hand and allowed him to haul her up. But when she gazed down at her tormentor, her trembling legs refused to hold her up and Hooper had to carry her out of the yard. He sat her down in the middle of her ravaged hall.

“They’ve paid a high price for their bloody work, my lady,” he told her, “but, I fear, so have we. God damn me! I should have seen it coming!”

“No-one could have foreseen this, Hooper,” she breathed, distracted by the devastation.

“Pah! I should have known, my lady!” he replied. “Sir Robert’s burial is the first time in months that the household’s been so deserted.” Then, as if suddenly seeing her despair, he bore her swiftly out of the hall past several more bodies.

“It’s no less than I owe you, my lady, but please don’t think you’re safe now.”

“Aye, I know. Now that Robert’s gone and, it appears, is attainted, I understand… Catesby will allow me no peace…” Her words faltered, seeing again the servants who lay by the door. “Put me down please, Hooper.”

She knelt beside the bludgeoned gatekeeper, a man she had known for twenty years. Resting a gentle hand upon the dead man’s head, she asked: “Where are the other servants?”

“The first ones here, my lady - after the burial - came to prepare the house. I fear they were… most harshly dealt with... though your maid still lives.”

Unwilling to look at him, Emma had to ask. “And your own men?”

“Sold their lives dearly, my lady; only two remain but, be assured, they’ll not let you down.”

“I’ve set your maid to look out what you must take with you, my lady.”

“But… where can I go? If our lands are being taken… where is there left to go?” she cried. “What am I to do, Hooper? If Catesby has poisoned folk against me, who would risk helping me?”

“Someone with no love at all for Master Catesby, my lady?”

But there was no-one. God had stripped all her family from her - and even the rest of her kin were scattered like forsaken leaves in autumn. There was no-one left who could possibly stand against Catesby.