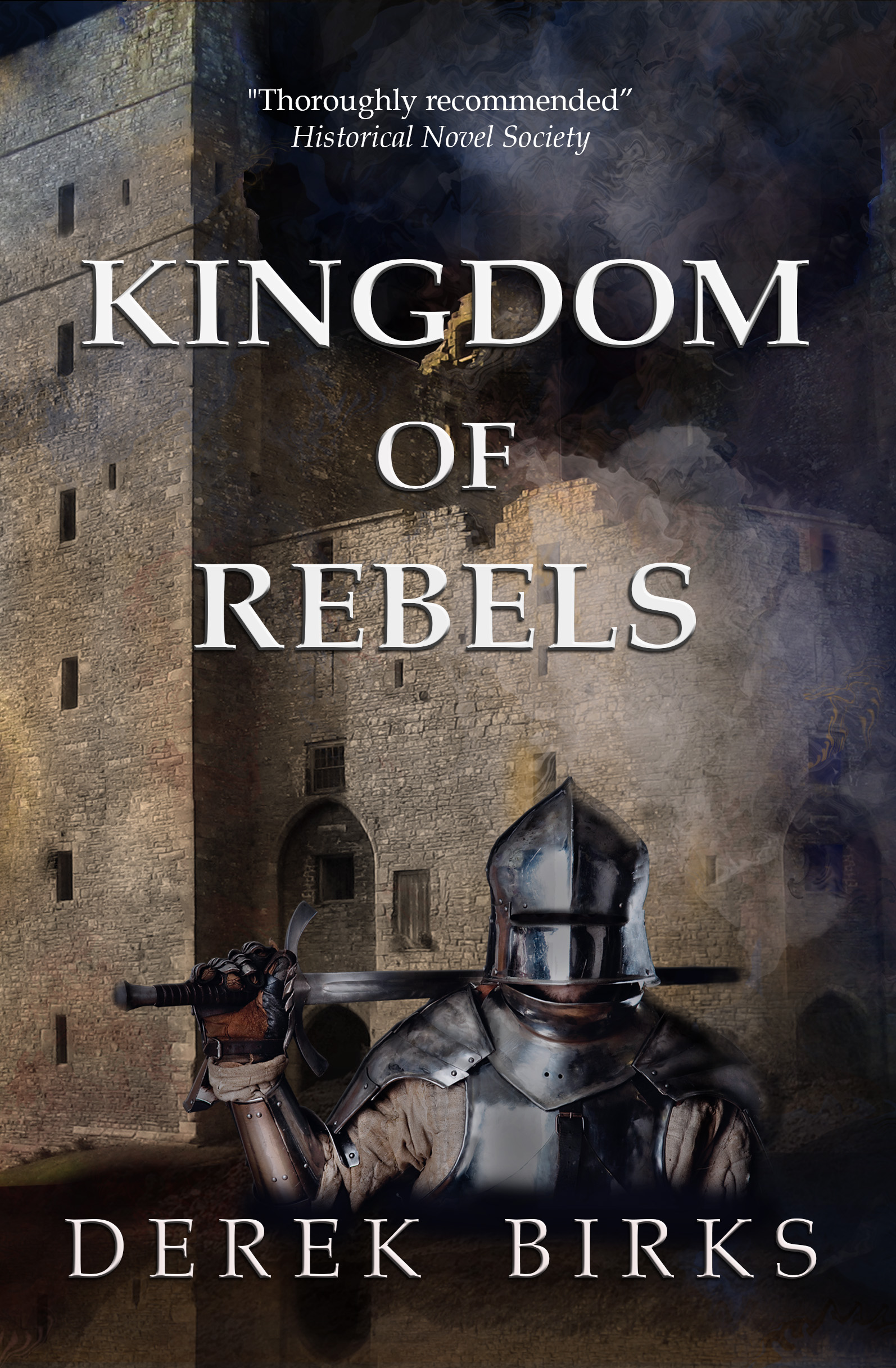 At dawn Eleanor and Becky went up to the highest rampart the castle offered at the very summit of Crag Tower. They stared out across the valley to the north where several spirals of smoke twisted up until the brisk wind seized upon them and scattered them eastwards.  So, there had been other attacks in the night.
“I will go mad here,” said Eleanor.
Becky grimaced. “You won’t be alone.”
The breeze was cool but they did not mind for it discouraged others. Eleanor would have stood out in the pouring rain if it meant she could find some privacy, and a little peace.
“Here we all are crammed into this overstuffed kitchen garden, slowly rotting away. How kind of the good Lord to ease the crowding by killing some of our young men at arms. My brother released the men from their oaths three years ago - pity for them they didn’t leave then.”
“But not for us - we still need them,” said Becky, “and three years ago they had nowhere to go.”
“Aye, but we can’t afford to pay them or feed them,” said Eleanor, holding out her tattered clothes in disgust.  “We’re beggars in our own castle - and this is a God-forsaken place…”
“Aye, lady.”
“We can’t go on like this. Everyone knows it; but no-one says it. Every week brings another attack. Have these border folk nothing better to do? It’s not as if we even want to be here!”
The door up to the rampart swung slowly open and Lady Maighread Elder stood in the doorway. She smiled, or at least the left side of her face did whilst the other half, ravaged years ago by fire, merely creased awkwardly. The breeze caught her copper hair and threw it across the scarred cheek.
“Oh, shit,” said Eleanor.
“God give you good morning too, Eleanor,” said Maighread.
“I pray He’ll give me more than just one good morning, aunt.”
“I do wish you wouldn’t call me that,” said Maighread, “I’m hardly older than you - we could be sisters.”
“No, we couldn’t,” replied Eleanor, turning away. Looking at Maighread's tarnished beauty was more than she could bear. Instead she returned to looking out over the North Tyne, watching it flow in its great curve to the northwest.
“I’m sorry,” said Maighread, “I was just seeking a little peace.”
“So are we all.” Eleanor knew her voice was cold and regretted it at once.
“I’ll leave you then,” said Maighread quietly.
“No,” said Eleanor. “This is more your home than mine. Even after four years here, Crag has never felt like home.”
“I never wanted it to be thus.”
Her aunt was always so generous to her but fair words often grated in her ears. Maighread did not deserve her hostility but she received it nonetheless. It was not Eleanor’s fault that they were all thrown together in this way, yet she knew it was not Maighread’s either.
For a time the three of them stood together looking out over the battlements, silent as the stone. Then the door slammed open and the garrison commander, Sir Stephen, tramped up to them.
“Oh, good Christ!” exclaimed Eleanor and pushed past him to descend the steps to the chambers below. Becky smiled an apology and ran after her.

Below in the Great Hall, Eleanor stood silently beside Ragwulf. She had come to know him so well and yet he was as distant towards her as he had ever been.  It seemed that some wounds just would not heal. She could read his face better than she could read a book - though that was no great claim in her case. His eyes were fixed upon the wall; his anger had gone and his face now bore only the dark lines of regret.
She touched his shoulder but he shrugged her arm away. She opened her mouth to speak but he held up a hand.
“Don’t, my lady,” he said. “Don’t say a word. It’ll help nothing.” Then he turned away.
He was probably right; when had she ever said a word that made things better between them?  ‘Between them’? Even her thoughts threw them together, though there was a chasm there long before this morning.
“I only wanted to thank you,” she said, “for not telling them.”
He faced her again. “Thank me? High born ladies don’t thank men for keeping oaths freely given.”
“But it was hard for you, I know. Wulf’s your son, after all…”
“I knew what had to be said and I said it, my lady. The last thing I want is your thanks for it!”
His bitter words cut her but he would have known that. He meant her to feel some pain too. She could not stop looking at him, waiting for him to meet her eyes but he didn’t. Instead he turned on his heel and left. She stared after him, listening to the familiar footsteps echoing in his wake.
§§§§§

Hal was left by the well, alone. Everyone else had disappeared - most to continue repairing the gate - but he had seen his friend Wulf go to the stables, his face set in anger. He went after him and found him there brushing down one of the few remaining horses.
“That’s your father’s horse,” he said softly.
Wulf did not look around but carried on brushing with long angry strokes. “I know.”
“You can’t leave,” Hal said simply.
“We’re not young boys any more, Hal. And our lord has freed us from his service. We can go - and we can make our own way.”
“We need you here - and they won’t let you take Bess...”
“Oh. I’ll take her. You know that. It’s not as if she doesn’t want to go! We could have just wed - and stayed. But it seems not…”
“I don’t know what all the fuss is about,” said Hal, “but I could talk to Lady Eleanor-”
Wulf looked round sharply. “Don’t bother. Bess has already asked her a hundred times. It’ll do no good.”
“Don’t do anything sudden.”
“Sudden? I’ve thought of little else for a year or more. There’s too many of us here anyway. I’m going and I’m taking some of the lads with me. This place will fall sooner or later and I don’t want Bess to be here when it does. Are you coming?”
Hal winced. Sooner or later he had known the question would be asked.
“Wulf, you’re my oldest friend; we’ve fought side by side and faced death together more than once…”
“But?” said Wulf with a rueful smile.
“My service to Ned Elder is… it’s beyond oaths. When I was alone he gave me a life.”
“And you’ve repaid him time and again, my friend. How many more times do you have to repay him? Or do you have to die in his service? You don’t even know where he is - he might be dead by now.”
Hal smiled. “Wherever he is, he’s not dead; I’d know it. He always comes back - always.”
Wulf shook his head. “Well, come Lammastide, I’ll be back - for Bess. Perhaps you’ll have changed your mind by then.”
“If you take your father’s horse, he’ll kill you,” said Hal.
“Only if he catches me,” grinned Wulf. “Best say ‘God be with you’ today for, by the morrow, we’ll be gone.”

The following morning Hal stood in the Hall. On the small dais before him was the Elder family’s pale blue banner and beside it was Ned Elder’s great battle sword. Hal had brought it with him to Crag Tower and Lady Maighread had put it in a place of honour. Now Hal stared at it wistfully, wondering whether he had done the right thing.
Wulf had gone at first light. He had taken eight men and all the remaining horses. Lady Eleanor had raged about the small castle all morning. Ragwulf had taken it in silence but his face was grey and drawn. No-one dared speak to either of them.
His friend had gone but, if he was true to his word, he would be back at Lammas. Then there would be words, harsh words, and more besides. It was all so… unnecessary.
Bess walked into the Hall with John toddling in her wake. She smiled at Hal and he put an arm around her. Her dark eyes were red-rimmed and her cheeks puffed.
“I’m glad you’re still here,” she said. “I’m not very popular with anyone just now.”
John hugged her leg and she bent down to him.
“I can’t find Wulf,” said John.
Bess smiled at the lad. “He’s gone for a while - but he’ll be coming back. You’ll see.”
The boy took the news well, Hal thought. “Come on,” he told him, “I’m going out to the butts with Will to practise. You can come and watch if you like.”
John grinned. Hal knew Ragwulf did not like the lad to go outside the castle walls but the butts had been set up out there to keep the young men out of the way and out of mischief. If John was with him it could do no harm. He turned to Bess. “Will you tell Ragwulf where I’ve taken him?”
Bess shook her head. “No, I won’t! Not unless he asks me. He’ll be livid.”
“John’s safe enough with me.”
“Aye, I know, but Ragwulf and Lady Eleanor won’t see it that way, I promise you.”
Hal shrugged. “Just at the moment I don’t much care what they think,” he said.
He took the boy’s hand and led him out into the courtyard. Will, Lady Eleanor’s seven year old son, was waiting with his bow and arrow bag.  He handed the bag to John to carry as they went out to the butts and the small boy skipped along beside them. Hal shook his head - oh, to be just four years old again. It occurred to him then that when he was that age, he still had a father and a mother. He remembered being happy. Perhaps his parents were too, though he knew now how hard life was for those who toiled on the land. At least John still had his father - if Ragwulf was indeed his father. It did not always seem so for he scarcely ever looked at the lad and there was certainly no resemblance. Whereas when you saw young Will and Lady Eleanor together, the likeness took your breath away. Will was tall, as his father had been, but he had his mother’s blood red hair.
Hal was one of the few who actually enjoyed the butts for he lived and breathed archery. He could never practise enough but after several hours of watching, fetching and carrying, the novelty wore off for both John and Will. Hal decided they had been gone long enough in any case and that was confirmed when he saw Ragwulf striding through the long grass towards them.
Hal bent down to John and whispered. “I hope you enjoyed your morning, John; ‘cos now we’re for it.”
John grinned and Hal sighed in resignation.
Yet when Ragwulf came up he was strangely quiet. He had taken Wulf’s leaving badly. He did not chastise Hal for taking John out; in fact he seemed almost grateful and clapped him on the back.
“I’m thankful you stayed,” he said gruffly. “It must’ve been hard for you.”
Hal looked at him. “Harder for you to bear than me, I think,” he replied.
“Best take the lad back though,” said Ragwulf and he turned to go back to Crag Tower.
Hal waited for a while, watching him trudge up towards the gate. He should look like a warrior in his prime but he walked liked an old man, his shoulders hunched and his head bowed. What weight did he bear on those broad shoulders?